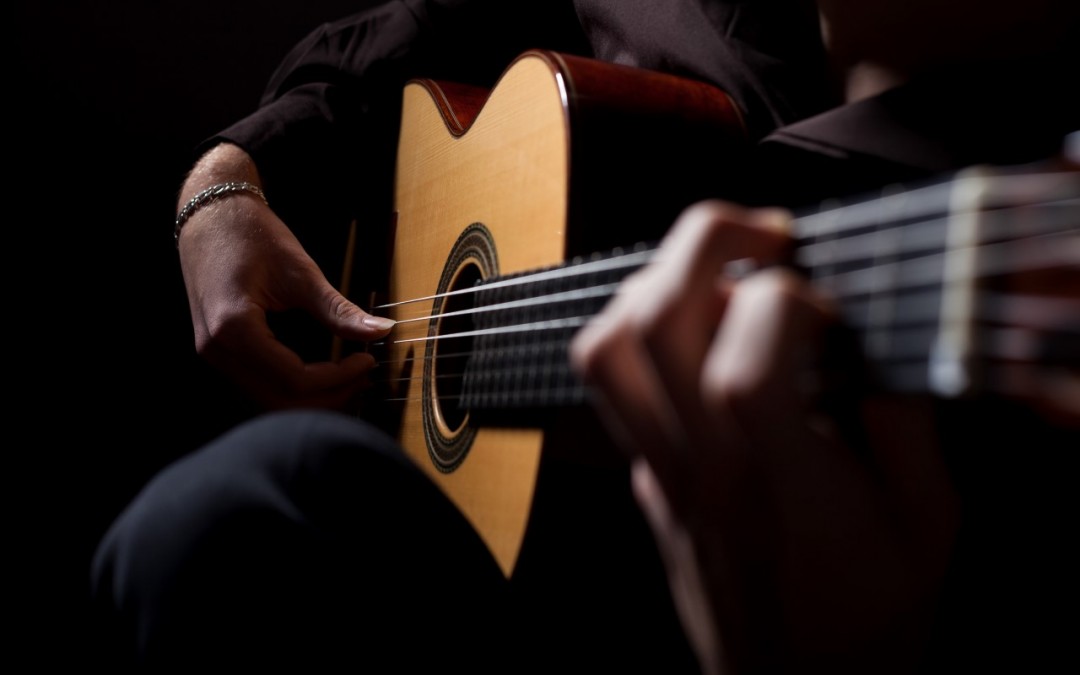 This week we have a very special post from Marc-Andre Seguin, the webmaster brains behind jazzguitarlessons.net. Be sure to go and check them out, there are loads of video lessons, PDFs, blog posts and various resources to help you take guitar and jazz to the next level. Anyway, the rest here is from him:

Chord progressions have been around since the classical music period.  They are the backbone of harmony in Western music to this day.

From pop to jazz, we listen to songs regularly; all containing easily learned chord progressions.

Let’s take a quick review of the basics.

Chord progressions revolve around a tonal center referred to as the “key” of the song.

In the Key of C Major (CM), these notes would be the white keys on a keyboard.  The seven notes of this scale comprise the diatonic scale.

Different genres usually employ different chord progressions to make that particular genre’s sound.  For example, the most famous chord progression in jazz is the II-V-I (commonly called the II-V for short).  We’ll look at this progression and more.

Roman numerals often identify the chord “placement” in each progression based on the classical tradition.  For example, in the key of CM another common jazz progression is I-VI-II-V.

But first, let’s look at the common CM scale to review each degree and then get to some chords.

We can now harmonize these scale degrees with chords and apply the corresponding Roman numerals to them.  Remember, each degree stems from the 1st degree which is the tonal center or key.

Similarly, if we designate D as I (see table below), we are then in the key of D which becomes the tonal center.  The scale degrees remain static, remembering though, that D is now the root (I).

Some Chords of the Diatonic Scale

We can now harmonize the notes of the diatonic scale degrees to the corresponding chords.

In the key of CM, (and in a jazz voicing), these chords would appear as follows:

Chords in the Diatonic Scale of CM

(View this simple at chord chart at JazzGuitarLessons.net)

Remember that famous II-V-I jazz chord progression we talked about earlier, well, here it is in CM.  Grab your guitar.

Notice how the first chord starts out on the II which is a little bit removed from the I, (home) and then we wander further away with the G7 (V), leaving a feeling of “ got to head back”...and finally we resolve comfortably back home to the I.

The fifth degree provides a tension leading to a resolution at the tonic, however, a dominant seven chord tends to give us a bit more of that tension and sense to get back home.  The 7th is flatted in a dominant chord, such as the F7 above, perhaps pulling us even further away from the root.

Here is a II-V-I chord progression reference chart for you.

Have fun with it and look for these chord progressions in some of the standards and other jazz tunes you may listen to.

Another common jazz chord progression is the I VI-II-V consisting of the following chords played consecutively, again in the key of CM.

The I-VI-II-V or other progressions may be used to sometimes steer us towards other keys (a modulation) or towards a bridge for example.

There are many techniques employed to create tension and resolution within a song, but the chord progression is the perfect harmonized vehicle.

For example, in the above chord progression you can switch things up a bit by playing a dominant 7th for the VI.  The dominant chord in this case would be the“A7”.  The dominant seven played in place of the minor 7th (Am7) tends to give a desirable tension.  Give it a try with both chord voicings.

You could even make the II dominant as well for even more variation while playing.

That is three different ways we have looked at to move around the tonic (in any key!).

1. Play the original I-VI-II-V as above.

The Diatonic Cycle and Chord Progressions

This is personally one of my favourite ways to practice because many jazz chord progressions live within the diatonic cycle.

If we take another look at the II-V, we see that these notes are a fourth apart in degrees, and so are many other jazz chord progressions.

Simply play chords as we have described for the CM scale, but work your way around by fourths

Here is a link for more information on the diatonic cycles.

Playing chords within the diatonic cycle can be inspiring and practicing in this manner can really give a hands’ on feel to the sound and to where these chords might belong in a chord progression.  At the same time, you are learning their tonal relationships on the fretboard.

I hope that this article has helped you to learn about chord progressions.

The most important thing is to have fun and try not to get too bogged down in the technical details where practicing in itself becomes your goal.

It is sometimes best to treat new topics you are learning as merely a tool.

Once you have learned how to use that tool, use your ears and enjoy!

Marc-Andre Seguin is the webmaster, “brains behind” and teacher on JazzGuitarLessons.net the #1 online resource for learning how to play jazz guitar. He draws from his experience both as a professional jazz guitarist and professional jazz teacher to help thousands of people from all around the world learn the craft of jazz guitar.