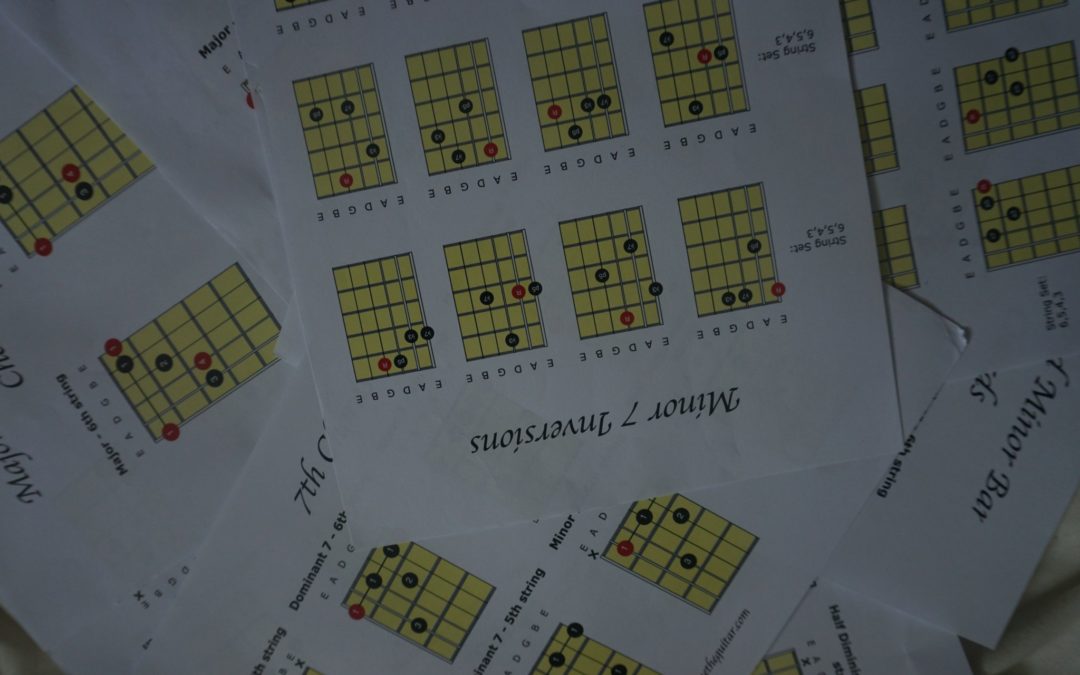 Ok so in this edition we will cover a lot more than in part 1 but since we spent that time in week 1 really focusing on the foundation with major and minor triads, we will move quicker through this week. If you haven't checked it out or need to brush up look at  the part 1 chord theory blog post.

Before we dive into chords we're also going to look at another foundation to chord building, which is intervals.

An interval is the distance between 2 notes and will either be major, minor, perfect, diminished or augmented.

The 4th or 5th is usually perfect in any chord, as it does not sound major nor minor. If it is changed, it will either be diminished or augmented. There is no such thing as a major 4th interval.

The 2nd, 3rd, 6th or 7th will either be major or minor. Minor intervals are always one semitone smaller than their major counterpart.

This table should clear it up and is also good for reference.

In this context, sus is short for suspended.

There are 2 types of sus chords:
Sus2
Sus4

We have this name "sus" because this chord feels unresolved, where the 2nd or the 4th sounds like it wants to resolve to the 3rd.

So what is a sus chord? A sus chord where the 3rd of the chord (usually major) is changed to either the major 2nd or perfect 4th.

In a sus 2 the E would be changed to what is a major 2nd interval (1 tone) from the root C, which is a D

These are major and minor's weird cousins. Diminished and augmented triads sounds great in context but are very dissonant and uncomfortable on their own.

In part 1 we talked about triads being 3-note chords and how both major and minor chords have a "perfect 5th". It is this perfect 5th that is either "diminished" (shortened) or "augmented" (lengthened).

So let's look at the diminished triad. It is usually written with the note name followed by "dim" or a small circle.

This chord is built off minor 3rds, so we have the root note, and then a minor 3rd.

Then from the minor 3rd we move another minor 3rd interval. From the root this note is the diminished 5th, one semitone lower than a perfect fifth. This is also known as a tritone, so to find it from the root, move 3 tones. 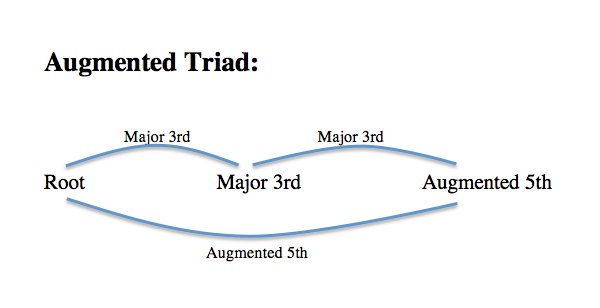 The augmented chord is usually labeled with the note name, followed by "aug" or +

There can be some confusion with naming notes within a diminished or augmented chord.

The same rule applies here. In an augmented chord we have root (1st), major 3rd and augmented 5th, so our note names need to reflect that.

The second example is not as common (and yes, F## is a G). The importance is not so much on saying the right name but understanding the make up of the chord, so you most probably will come across sources that say a Baug is B, D#, G. The understanding is more important.

The theory of an add chord is relatively simple. It is most commonly built from a major or minor triad in which it will be specified. Then simply take the triad and add the specified note.

Since the chord already has 1, 3 and 5, and 7th chords are another entity (which we will look at in part 3), we will only be adding either the 2nd, 4th or 6th, also sometimes called the 9th, 11th or 13th respectively.

Traditionally you would use 9th, 11th and 13th when the added note is over an octave away from the root. However, in reality they are quite interchangeable.

The 2nd/9th will always be a major 2nd interval from the root (1 tone).

It will be clearly specified if the added note is not one of those intervals.

C9 is a different chord which we will look at in part 4.

Getting a little more complex, you can also have multiple adds, e.g. Dadd2add4 - D major triad with the 2nd and the 4th

Or C69, C with the 6th and the 9th (or 2nd). This one may seem contradictory to the rule about needing to use "add" for numbers 9 and above, but since this is preceded by "6", there is no need as it is obviously an "add" chord.

Another thing to be noted on a practical level, especially for guitarists, is that not necessarily every note of the chord needs to be present. For example, the 5th may be omitted where we would see C4 with just C, E and F.

It also may be the case in a band context where the keys or another guitar are playing all the notes of the chord, whereas you are just highlighting 2 or 3. This is where chord theory really comes in handy as you know which notes in a chord are the juicy ones to highlight (jazz players froth on this).

These are very simple. A slash chord is when the bass of the chord is different to the root note. The chord name comes first, the bass note comes second.

Root note - what the chord is built from.
Bass note - lowest pitched note.

This can also apply to notes outside of the chord, such as D/G. G is not part of the D chord but here we see a D chord with G being played as the bass note.

There is no need to call this D4/G as the fact it has a G (the 4th) in the chord is very clearly specified.